On the 204th episode of SBS MTV The Show, aired last September 24, 2019, Everglow took home their first music show win for “Adios,” squeaking past Dreamcatcher and “Deja Vu” with a score of 7861 to 7850. However, this win was not without controversy, as InSomnia (Dreamcatcher fans) believed that Dreamcatcher should have won, and presented mathematical evidence to support this belief. The initial narrative was that there was a computation error that gave Everglow the win by a mere 11 points. However, digging deeper strongly suggests that while indeed, “Deja Vu” should have won, there was no mistake. Only a deliberate, concerted effort to rob Dreamcatcher of their first win. 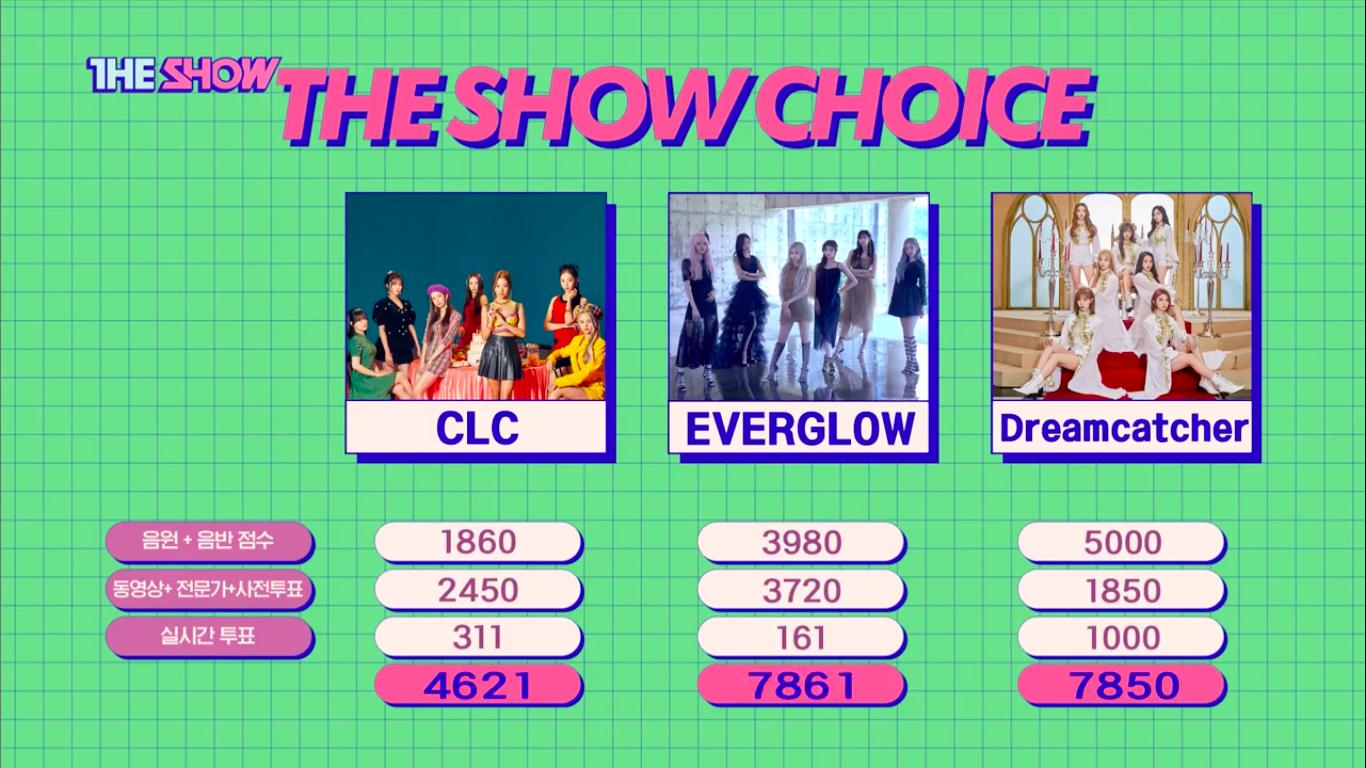 How The Show calculates scores

On The Show, the total score is broken down into a 90% prefinal score and a 10% score from live voting. The 90% prefinal score consists of 50% sales, 20% YouTube MV views from all official distributors, 15% expert picks, and 5% pre-voting on StarPlay (formerly StarPass). The 50% sales are broken down into 40% digital sales from Korean web streaming services such as Melon, Genie, Naver, Bugs, etc., and 10% sales of physical albums as reported by the Hanteo charts. Sales and views are counted from Monday until Sunday of the previous week.

Due to the nature of the digital sales, which draws from multiple music charts which in themselves are not exactly transparent about the number of streams recorded, this is not the easiest category to deal with. Data on physical sales, however, is pretty easy to obtain and verify.

Scores on The Show are numerical, with an upper limit of 10000 points; thus, 1% corresponds to 100 points. For instance, the 5% pre-voting corresponds to 500 points, while the live voting corresponds to a maximum score of 1000 points. Category scores are relative, i.e., all actual figures are scaled down to the maximum score. For instance, if the top group in physical sales sold 2000 copies that week and got the full 1000 points, a runner-up that sold 1500 copies would get 1500/2000 × 1000 = 750 points in the physical sales category.

Frustratingly, in the final display of scores, the individual category scores (except for the live vote) are not seen; instead, several categories are lumped together, as can be seen in the three rows. While this is ostensibly to provide a much cleaner display, it also serves well to camouflage any wrongdoing.

The first row corresponds to the sales; it is the 40% digital sales + 10% physical sales. The maximum possible score attained here is 5000 points.

The last row is the live voting, where, unlike with pre-voting, we have literally no way to verify that what is displayed reflects the actual voting result; we take it at face value. The highest possible score here is 1000.

This was yet another example of a close victory, where The Boyz squeaked past N.Flying on a score of 7032 to 6930:

The pre-voting data (from the StarPass days), as shown here, had N.Flying winning the 5% category.

Assuming full scores for MV and expert preferences, they got a total score of 461 + 2000 + 1500 = 3961. Apparently, this was rounded up to the next ten, 3970. This in itself is pretty bad practice, given that some contests have been decided by fewer than 20 points and that this is inconsistent with the last row, which allows for single-digit differences. Checking other episodes reveals that they appear to be consistent with this practice, though, so we will assume this moving forward. We will similarly assume that the first row is rounded up.

(Important note: With N.Flying vs. The Boyz, we cannot establish wrongdoing, simply because based on tweets from around that time period, N.Flying got utterly waxed at YouTube MV views; TBZ garnered 7 million views for “Bloom Bloom” at some point within that week, while N.Flying have not even broken a million with “Spring Memories” as of today. The judges did favor The Boyz, but, based on some estimates I did, within reason: N.Flying got something like 1000 points out of 1500. Not the worst thing in the world. If my fellow N.Fia want N.Flying to win with “Good Bam,” we have to do a lot better at YouTube streaming.)

Back to The Show 204: physical and digital sales

In the first row, which is the combined physical and digital sales, Dreamcatcher got a score of 5000 to Everglow’s 3980.

What do the charts say about this?

Deja Vu’s first week charting is perhaps the highest Dreamcatcher have ever attained. While it seems they did not get as close to charting in Melon as they did with Piri (peaking at 101), they peaked at 11 in Bugs, they also charted on Genie, Naver, and Soribada for the first two days:

For comparison, a cursory Twitter search suggests that “Adios” had fallen off all aforementioned charts after the first week of September. (Their international sales/Spotify streams are still going strong, to their credit, but that doesn’t count here.) Again, due to the opaque nature of and sheer number of variables involved in computing the digital score, it is pretty much impossible to establish wrongdoing in this part of the score. But this alone should have you on edge.

Let’s now look at the second row, which is most fans’ main point of contention, and where we can establish beyond reasonable doubt that wrongdoing took place. I will not be doing the calculations myself here, as others have beaten me to it.

As can be seen in the calculations linked, for 2/3 of the groups, the scores obtained agree with the scores on The Show… with one massive caveat.

The problem isn’t just that Dreamcatcher got fewer points than they should have, though arguably giving them even just those would have earned them the win, so this is understandably the hill on which most InSomnia are willing to die.

The problem is also that both CLC and Everglow appear to have gotten full expert scores, with Dreamcatcher getting even less than the minimum of 0 points. Given Deja Vu’s modestly successful first week (at least by mid-tier girl group standards) and complete lack of anything to suggest that it is utterly bad (full disclosure: it is my favorite song of 2019, and possibly my favorite Dreamcatcher song, period), this is difficult to read as anything other than an act of sheer malice, meant to humiliate Dreamcatcher.

Can expert scores be negative?

The whole expert preferences part of this competition is cloaked in mystery. All we know is that it takes up 15% of the score, that is, a maximum of 1500 points. Our objection hinges on one assumption: experts do not give negative scores. This is, to my knowledge, not explicitly stated.

However, there is a good reason that indeed, experts should not be allowed to give negative scores. If an expert is allowed to give arbitrarily negative scores, then they can clearly have their pick by setting the other two scores as low as they please, even taking away points earned in other categories. Obviously, this would be unfair.

But even if they were allowed to give negative scores, albeit with a limit, this would still be unfair. For example, if the expert scores were from -1500 to 1500, then by adding 1500 points to all contestants, we can see that this has the same effect on the final outcome as their scores being from 0 to 3000. The maximum score in this hypothetical scenario is now 11500 instead of 10000, and expert opinion would count for 3000 out of 11500 which rounds out to about 26% (an outrageous percentage), not 15%.

For the expert score to be at its stated 15%, no expert should be allowed to give a score lower than zero. Yet this appears to be, among many other things, exactly what happened.

While it is easy and somewhat comfortable to assume that what had happened was a simple lapse on The Show’s part, this is unlikely to be the case. The suspiciously close digital score and bewildering expert marks that fail to reflect any tangible realities suggest deliberate, calculated tampering with the final scores to Dreamcatcher’s detriment.

It is even harder to assume good faith when, in the face of numerous social media posts, news articles, and videos pointing out the discrepancies, SBS MTV The Show have not only failed to acknowledge wrongdoing, they also refused to award a winner for today’s episode and continue to mock angry InSomnia on their Twitter account. (You can reasonably make the case that this is a special performance, but in light of their announcement of X1’s victory during a similar special episode, this does not sit well with many.) The inclusion of a first win montage right after Dreamcatcher’s performance on today’s episode does not help things.

In conclusion, SBS MTV The Show have not only failed to give Dreamcatcher the first win they earned, they continue to refuse to rectify this mistake and make amends, opting instead to continue mocking and insulting fans justifiably upset by this. Dreamcatcher and their fans deserve so much better.

View all posts by xdoublestar